by Barry M at 12:00
Can you teach an old dog new tricks? How do the long-standing, traditionalist breweries react to new trends in the German market? I sampled a couple at BrauKunst Live! 2014.

Schlossbrauerei Au has been around since 1590, so I think it's safe to say that it has a long tradition, and still with a Baron Freiherr at the helm. So it was interesting to see their beer list with a few oddities. First up, the Schlossbrauerei Au Grätzer. At 4.4% (12,2° Stammwürze), Gerrit and I were not sure if it was "to style", but frankly, neither of us really gave a crap. What it is, however, is an unfiltered dark straw, with a big, pillowy, banana aroma and a light clove touch. Same on the flavour, but cut with a delicate sourness, like a squeeze of lemon, finishing dry and long. The ingredients listed Weizenmalz, Rauchmalz and Spitzmalz, but there can't have been much in the Rauchmalz department, as that was quite subtle. Have to say, though, I quite liked it!

What I had visited the booth for, however, was to try the Schlossbrauerei Au Eiskeller Rotweinfaß, aged, as the name suggests, in red wine casks. Pretty much a Doppelbock that was either going wrong or out of date (I'm not great with that dialect), they decided to experiment and put it into Italian oak wine casks for 12 months of aging. The result is quite remarkable. Big aroma, redolent of red berries, oak and vanilla, likewise, the flavour is bold, with raisins, raspberries, cherries, vanilla, with a gentle woody touch in the background. A sweet, marzipan-like finish wraps it up nicely. With only 1600 bottles made, I'd be quite hoping they try it again! 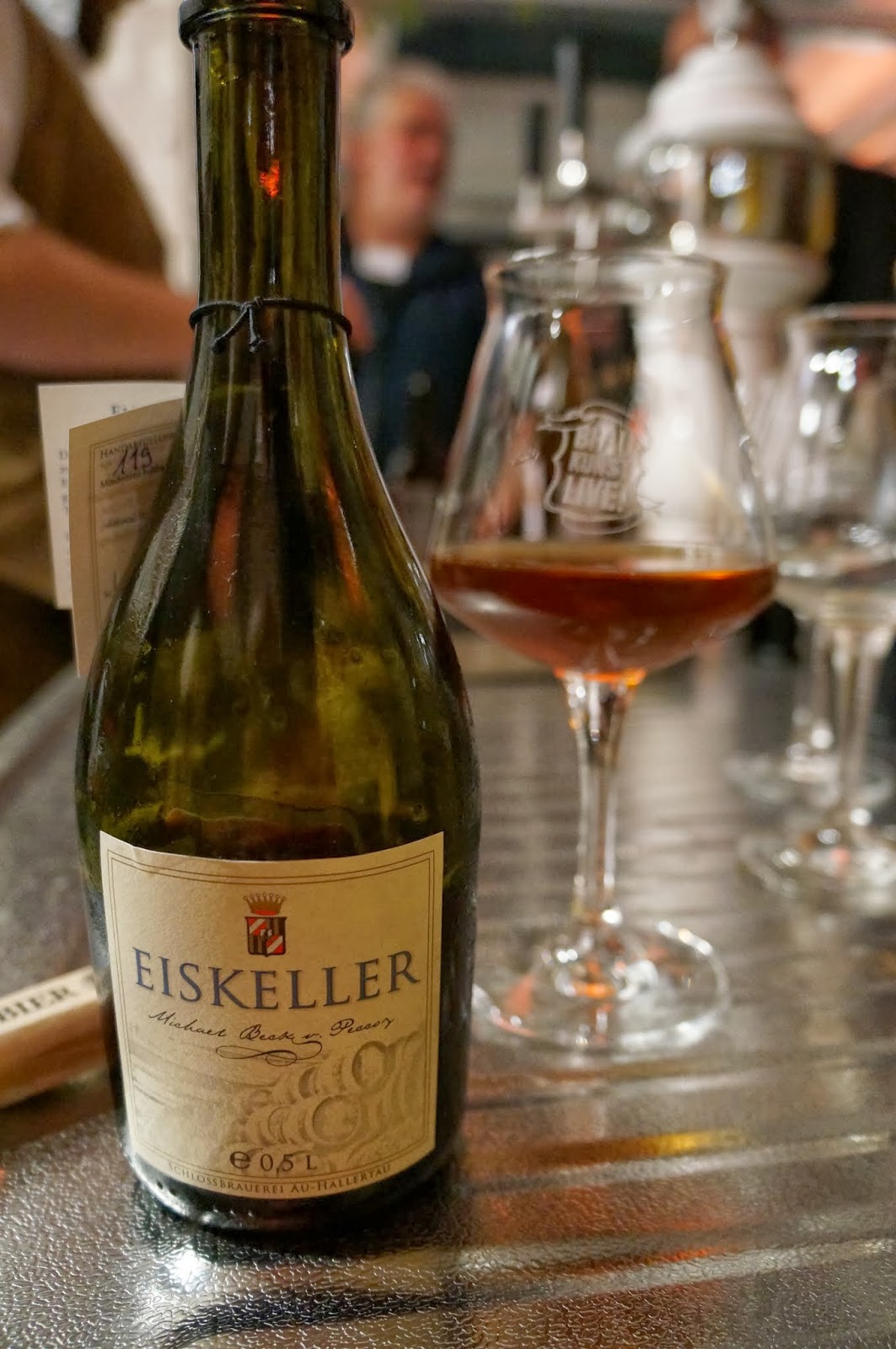 And on to Fürst Wallerstein. No simlpe Barons here, but a proper Prince! Presented at the BierTraum booth, I asked to try the 1598 Fürst Wallerstein Edition Privée. I was told that this beer was expensive and that, normally, they'd ask for 10 tokens for a 100ml  sample (that's €5, I think), but they made a deal with the brewery to let it go at just 5. It normally retails at €90 a bottle. I wish he hadn't told me all that before trying it, as that set expectations high. Though I'm glad I didn't read the description on the 1598 website either, or I would surely have felt unworthy to request a sample. Be that as it may, I got my sample and retreated to a safe distance, clutching business cards of the reseller and the Fürst Wallerstein sales manager, which I felt obliged to accept.

Clear amber, with not a trace of carbonation, it has a pleasant cherry, caramel and bitter almond aroma. Flavour-wise, well, rather dull, given the price tag. Slightly syrupy, with sweet caramel, soft fruits and a taint of cardboard hovering at the edges. Shame, really. 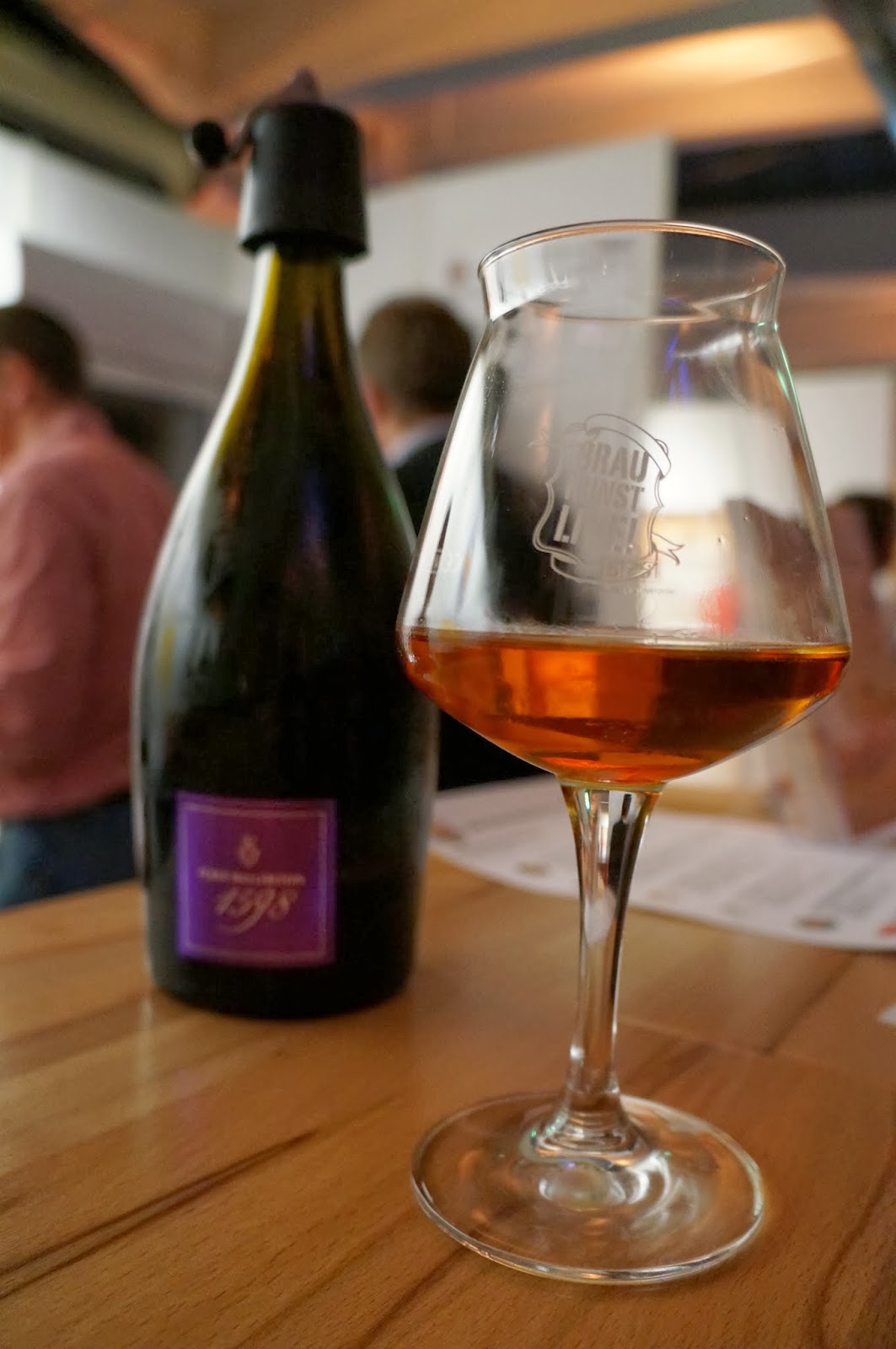 And so to an old hand at the game, both in traditional and not-so-traditional brews, our friends at Schneider Weisse. I have to admit, I love Schneider beers, and spent several happy hours in the Weisses Brauhaus last year, not to mention them being regularly on my cellar shelves. And looking below, you'll see they are well loved by the crowds at BKL. 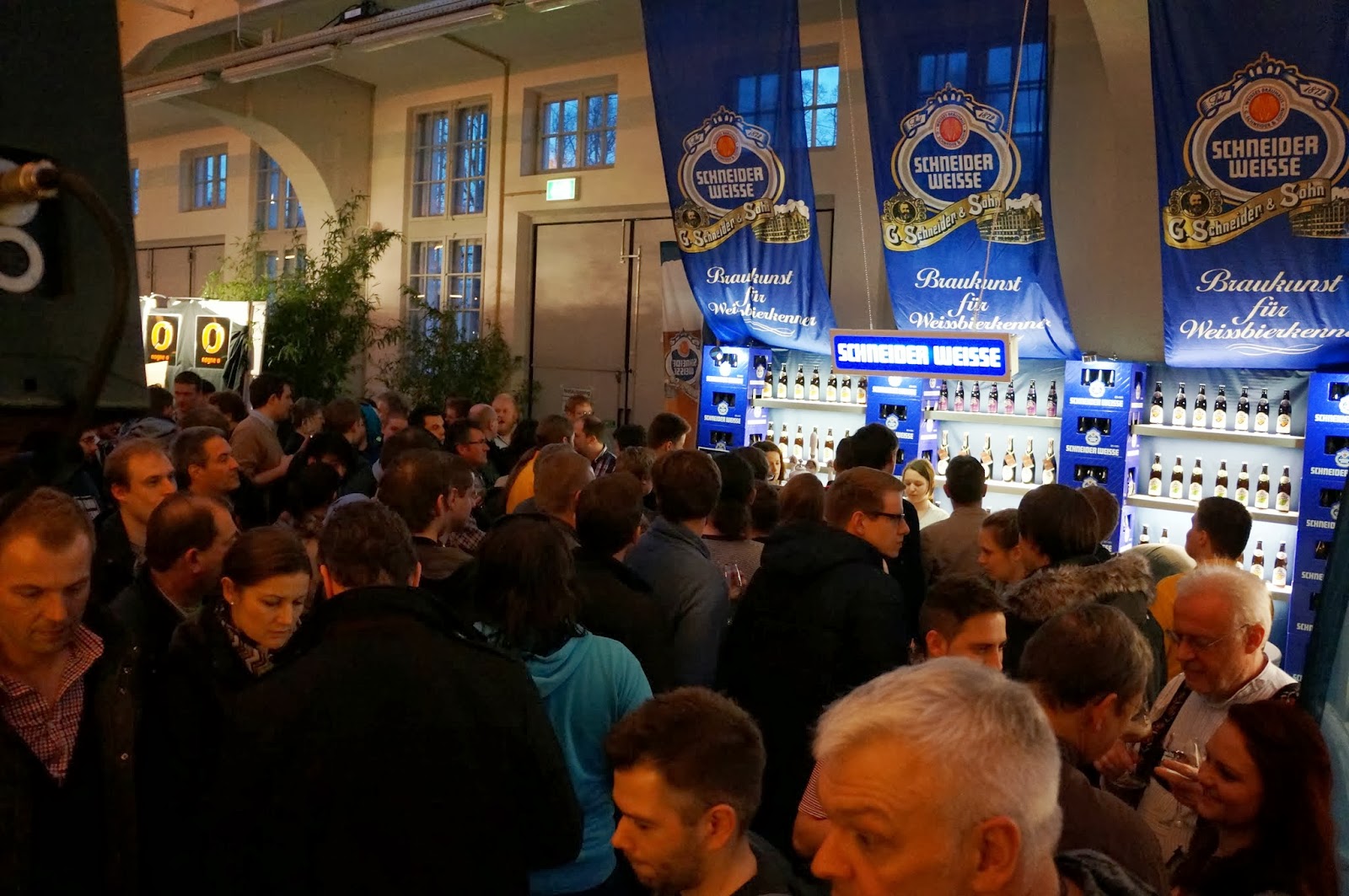 There was only one beer that needed sampling, and that was the new Schneider Tap X, Meine Porter Weisse. With an aroma that hinted rather heavily at the Weissbier components, there wasn't much portery going on, apart from a hint of milk chocolate. Neither was much in the way of dark malt roastiness to the flavour, but there was certainly lots of tasty dark berry things going on, mixing well with the juicy, Weizenbock-like flavours. I have to wonder why bother calling it a porter weisse, when it nods vigerously in the direction of a Weizen Doppelbock (and oh, how they do that so well). I'll be sticking to the Aventinus, which is also more suited to my price range.

Next up, craft or crafty in Deutschland? Or do we really care?

While very well made, the Porter Weisse didn't seem especially new to me - it made me think of Schwarzweiss, and in particular the excellent Kapuziner Weissbier Schwarz.

I think I found it a bit richer than a Schwarzweiss, but I take your point. I'm wondering why use the name porter, when it might be more a "Schwarzweißdoppelbock". Marketing? :)

Heh! Given that it's the "experimental line" I wonder if it's that, once scaled up to production volume, the experiment didn't work quite as well as it did on the pilot plant.

What, pray tell, is a Schwarzweiss?

So, basically a very dark Dunkelweizen. Maybe a German attempt to confuse, like a Black IPA? ;)