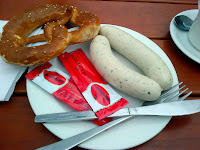 The morning after we were at Braukunst Live, TheBeerNut, Kieron and myself ventured out to the Viktualienmarkt for a spot of breakfast, which of course had to be Weisswurst, however with coffee instead of Weissbier. Joined soon after by Brian (AKA Lazarus), Mark and Jon, we were set to go visit a long list of  beer halls. However, the sea of red football scarves around us in the Markt foretold trouble was ahead, as masses of Duesseldorfers descended on Munich for a match. 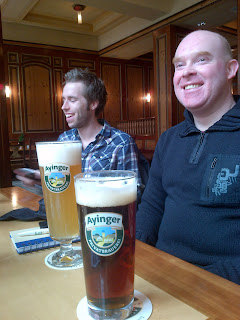 We tried to get into the Schneider Weisses Brauhaus, but it was not to be, so we soldiered on to the rather upmarket-looking, and pretty empty Wirtshaus Ayingers. At least it was pretty much empty when we arrived, shortly after 11, but soon filled up. It's not so "traditional" looking as other hostelries, but still has lots of wood, in a more art deco kind of way. An apparent trainee tapping a barrel livened things up, resulting in some punters ducking behind the bar and a bollocking from the boss, and by the time we left it was well busy.

Beer-wise, I tried the Altbairishes Dunkel. Crystal clear, chestnut brown, sweet, light raisins on the nose, it had a proper malty, caramelly sweetness with a bite of burnt toffee and a huskiness bringing a snap to the finish. Raisins and a mild pepperiness lingered, but I can't say I was overly impressed. The Kellerbier, on the other hand, golden and hazy, was really refreshing. Dry, biscuity, lemon-soap. A good morning beer. 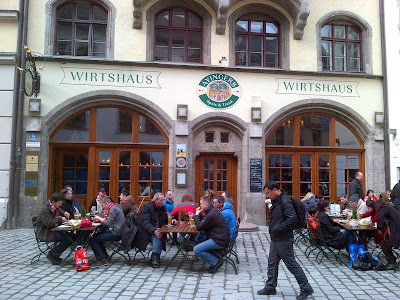 We reckoned that with the match due to begin around 3ish, it just wasn't worth trying to get into any of the popular central beer halls before then (though we did try), so we hopped on the S-Bahn out to Forschungsbrauerei, just a 15 minute ride from the city centre. 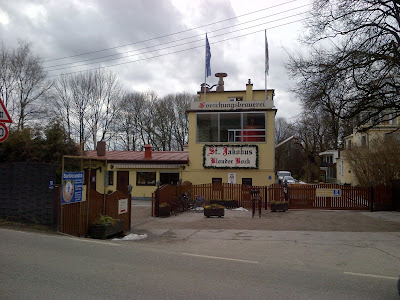 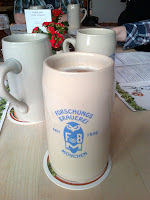 Forschungsbrauerei was well filled with locals, so they had to open the back room for the six of us to have a table. Being that time of year, they also had their St. Jakobus Blonder Bock on, and we were all encouraged to try it (narrowly avoiding a litre of the strong stuff). Served in a Krug, it seemed like a dirty, hazy thing, but smelled rather appealing, with honey to the fore and summer berries coming swiftly behind. Cream soda was my first thought on taking a mouthful, with sultanas, which works in my book. It has a gentle carbonic bite, providing a prickling finish, and a light herbal bitterness. Very nice, and masking a 7.6% ABV rather well.

Their Pilsissimus (which they said was an Exportbier), is also a fine beer. Light, grassy, herbal, with an earthy backbone, giving plenty to enjoy, and well sessionable. All very hard work, though, so a hearty meal (meat in most cases) was needed. 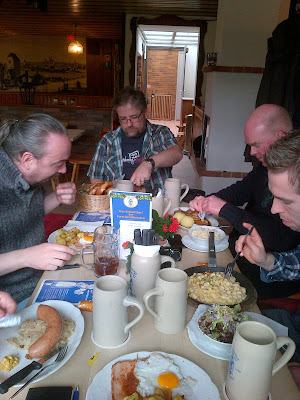 It's a nice spot, and at least the beers we tried were decent, so I could imagine spending a pleasant evening here. However, that was not to be, as we had a list, so back on the S-Bahn and into the central station, followed by a walk out to the Augustiner Keller. 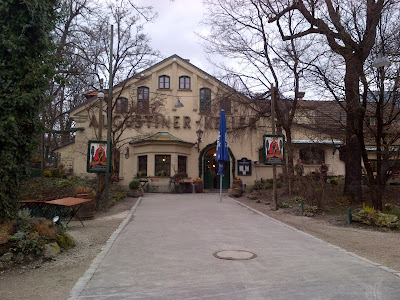 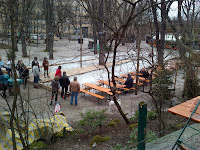 Ideally, we should have been visiting here in high Summer, sitting out under the trees surrounded by thousands of beer drinkers. As it was, the tables were stored away, but there were people playing what looked like Eisstockschießen. The main building was of course open and comfortably filled. We grabbed a table occupied by one well-fed local, and did the only decent thing, ordering an Augustiner Edelstoff. Well, I did. I have to admit, I've had Edelstoff some years ago from the bottle, and just found it ok, if not a little boring. I had to correct my impressions after this. A pale white gold, light pine, resinous on a digestive biscuit base, I loved it. Could be as much to do with the convivial surroundings, as I'd have happily spent the rest of the day there. The Augustiner Dunkel was also rather good. Clean and malty, not at all cloying, with a lingering chocolately thing going on. Lovely. 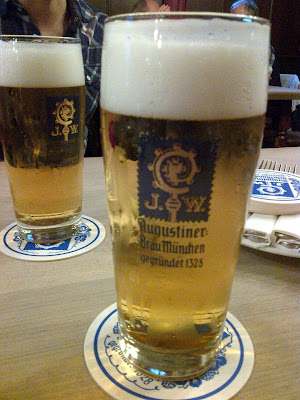 Encouraged by Mark, next on our list was the Spaten Braustuberl, listed in the Good beer Guide to Germany as being on Marsstrasse. What we found was what looked like an Italian restaurant, with napkins neatly folded on the table, so, with much confusion (as seen in the photo below), we gave it a miss and had a forced march on to the city centre. 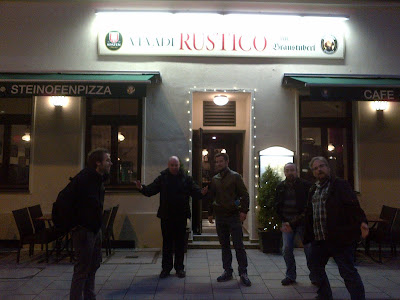 Our next target was Andechser am Dom, which we'd tried before heading to Forschungsbrauerei, but had to pass on as it was heaving with footie fans. Things hadn't changed when we got back, but we did find a table outside. It was pretty cold, so we had a fairly swift one, no notes, before heading to the Schneider Weisses Brauhaus for a second attempt (Mark was craving a Weisswurst). 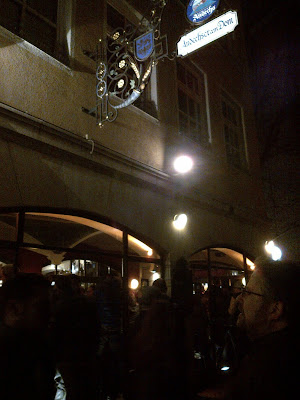 The Weisses Brauhaus was also heaving, so we stood in the porch for a while before deciding to head up the road to the Hofbräuhaus. I have to admit, we must have been drunk, as this was the lowest on my list of Munich destinations, being the tourist hellhole that it is. 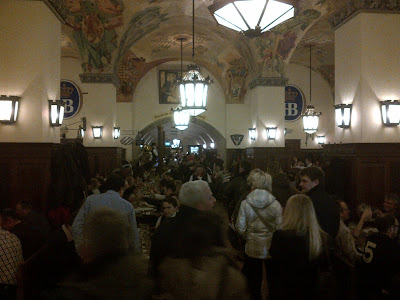 Still, on entering the cavernous, not least infamous beerhall (known in some circles as Hitler's local), it seemed like a good idea, till we realised there wasn't an inch of space free inside. We rambled about, loitered in the beer garden for a few minutes and then dived at a few seats that became free out there. We waited about 20 minutes without being served, then recognising the futility of it, at about 8:30 decided to take our chances back at the Weisses Brauhaus. We parked ourselves in the porch, endured the tongue lashing from the wicked witch of the east who was guarding the portal, before finally gaining entry.

I like the Weisses Brauhaus. The beer selection is great, if you like Weissbier, and even if you don't, the likes of Mein Hopfenweisse (Tap 5), Mein Grünes (Tap 4) or the classic Aventinus (Tap 6) mean there's plenty for all tastes, even though they are all Weizens. The food ain't half bad either, and we had a big feed of sausages, steak, sauerbraten and spaetzle. We spent the rest of the night here, sampling pretty much the whole range between us, including an Aventinus Liqueur (sweet, tasted like it was based on vodka with sugar and Aventinus, but was bloody good at the time). This, to me, is what the beer hall thing is all about. Good beer, good food and convivial company. An easy way to pass a few hours, which we did!
It was a rather late hour by the time Kieron, Brian and I arrived back at the hotel, via a stop at the Hard Rock Cafe, the only place that seemed to be open by the time we left the Weisses Bräuhaus (don't ask). Still, they had Augustiner on tap, so there's something to be said about Munich (not a sign of Becks, Warsteiner, Bitburger etc).

Next day, we trundled over to the Augustiner Großgaststätten, which was also too busy to get into the day before, for another Weisswurst breakfast. Having been gently scolded by the overly hands-on server (I mean really, it was bordering on being groped at one stage) for drinking an Apfelsaftschorle, a Maximator had to be taken. Dark toffee, prunes, date-like sweetness and a husky backdrop closing things off. I guess it helped. 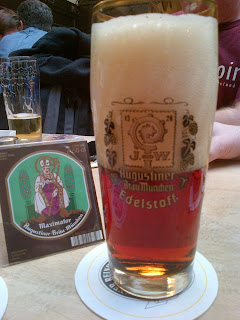 Last stop for me, the Lowenbraeu place near Viktualienmarkt, but the others struggled on after I ran for a train. 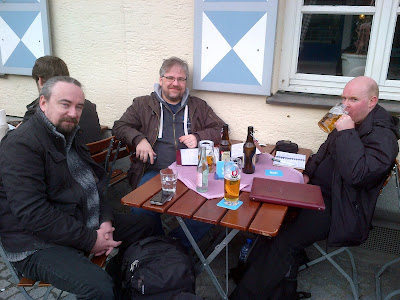 It had been a long time since I'd walked the streets of Munich proper. In my mind, I can't say it's the beer capital of Germany, at least in terms of the variety offered (with some notable exceptions), but what is there is generally of decent quality. Regardless of the beer variety, the surroundings of the beer halls and pubs, and the right company, make it a great place to eat, drink and above all, have a good time, and surely that's what the heart of beer is all about.

Mmm, Augustiner Edelstoff. That could be the most drinkable 5.6% beer ever. One could get very drunk on it very easily.

I imagine one could :D

what a great -looking weekend out. This is something I've wanted to do for a while now, and really need to get my act in gear to sort it. All the beer and food looks great, and ultimately, as you've said, it boils down to a bunch of guys have a good time. Brilliant. Jealous!

Yeah, it was a fun weekend, although I'd have enjoyed it more if I had been in better health. The evening in Schneider was just a great end to it too. Great beer, tasty grub, and talking shite :)