Kees to the Kingdom

by Barry M at 08:36
The other night I dipped into my Bamberg Box for a little sampling. I went for the Keesmann Bräu Bamberger Herren Pils and the Keesmann Bräu Sternla (Dunkle) Lager. I've added the Dunkle in brackets there because it's not on the front label, but is on the back. If I hadn't read it I would have expected a yellowy "lager", but you'll see. 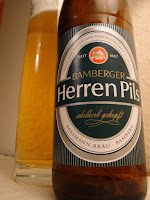 I know one shouldn't judge a book by the cover, and beer is no exception, but there was something about the Herren Pils label that I just didn't like. I don't know what. Maybe it was the word Herren making it sound feudal or something. It's a very slightly hazy pale pale yellow, and the photo here does not do it justice. It's like dried grass during a hot dry summer. There's a prominent fine hop aroma backed by a doughy sweetness. Interesting so far. I was expecting a hop bitterness hit on the first mouthful, but it was actually a pretty appetising maltiness that got me first. I wasn't expecting that in something so pale with the word Pils on the label. The hops only really emerge later on, not as bitterness, but more a warming spicy, citric character that cuts the malt. This is alot different to most Pils I've tried, and it works very well indeed, and was terribly easy to sink down! At 4.6% ABV, a pretty good session beer, but also something to savour. 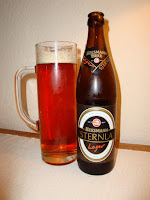 As I mentioned above, I was half expecting the Sternla Lager to be more like a Pils till I spotted Dunkel on the back. "Das Dunkle mit dem feinherben geschmack" in fact. It poured a rather appealing deep copper-gold, and gave off a full blown sweet malty aroma. On first taste it was just like it smelled. A malteaser-like sweetness with a touch of dark toffee. There's a very faint hop spiciness in the finish, but I found it was overpowered by the sweetness. In fact, I thought it tasted a bit like a malz bier, the non-alcoholic "childrens beer" as my wife calls it. Although I really like malty beers, this was verging on sickly sweet for me. I couldn't manage more than one in a sitting. Well, unless I went to Bamberg and had a tap right in front of me!

By the way, both were about a month past the best before, but that clearly made no difference. Bring on the Herren Pils says I!

Herren Pils is even better at the brewery tap. It is lovely in fact.

Yeah, Tandleman poured me a damn fine glass of it at the Great British Beer Festival this year.