Blind tasting Pils for our local

by Barry M at 14:02
There are a few things that are worth dusting off the old beer blog for, and a blind tasting is certainly one of them. In this case, a blind tasting to decide what pils will be served at our local.

Our local, Landgasthaus zur Linde, closed a couple of months ago, and now our friend, who actually owns the building, and lovingly renovated it five years ago, has chosen to run it himself, rather than seeking a another leasee. As part of that, there was of course the discussion on what beers to serve, so rather than take the word of the brewery sales people at face value, it was decided to do a blind tasting with five beers, four of which could be considered regional, and one big national brand. 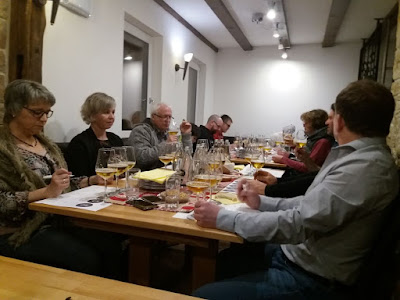 The tasting had eleven participants, with only two of us knowing what beers were being tested, though not the order. The beers were labelled A to E, and were poured in the kitchen, and brought out into the main room one-by one to be tasted, with rating being done on a 1 to 5 star basis once all the beers had been tasted. Tasters could give as many stars as they like. After scoring, the five beers would be revealed, and participants would try to guess what beer was what.

The beers to be tested were:


Of course, the most fun bout a blind tasting is that it forces people to leave their preconceptions at the door. And we all had ours! There were a couple of confirmed Faust drinkers, and based on the sales guy’s pitch, the proprietor thought this would come out on top. I think all of us had a less than stellar opinion of Distelhäuser Pils. For years and years I’ve said that I don’t like the pils, but can drink the export. Tannenzäpfle was expected to do well, although the love was divided. It’s one of those beers that you seem to either love or hate, and my own feeling sways from always having a crate in the cellar, to being sick of it. Two of the five, Bitburger and Eichbaum Ureich used to be served at the restaurant, under the two previous leasees, with Bitburger having been present four of the last five years. 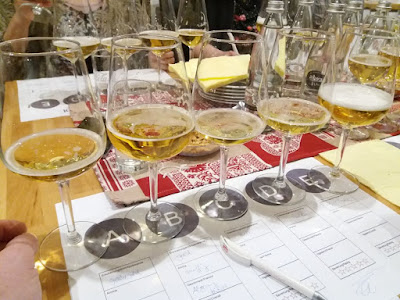 The results were very surprising, but the reveal will come at the end. As for the scoring, out of a total max potential of 55 stars awardable to a beer, these are the total and average scores.


Beer C was clearly the winner, by some margin, and B was a clear loser, with the rest filling up the middleground. The score distribution looked like this, and showed some interesting patterns.


So what were the beers?  Here they are, revealed

in order of rating.


Literally everybody was shocked at this result. Based on people’s preconceptions, Distel came in almost as the underdog, with Faust being the one expected to do the best.

When it came to then naming the beers, the results were also telling, confirming the biases many of us had. This was done before the results were tallied, so people were guessing the brand based on their own personal notes and scores. Of all the beers, Ureich was guessed most correctly, by five of the eight who tried to guess. The best guesses were by one friend, Klaus, who correctly guessed three out of five!

My own rating was as follows. I was fairly close to the average score, except for the Rothaus, which surprised me at how badly I rated it, though of late, it was clear that my love for it has waned. I only guessed one correctly, the Ureich, and it is telling that I also expected Faust to be the top rated.


I’ll say one thing, though, Distel do also produce a decent Weizen, and a surprisingly good IPA and Porter, so it thy also get served in the local, I’d be happy enough. I guess I should buy a crate of Distel pils on Monday! 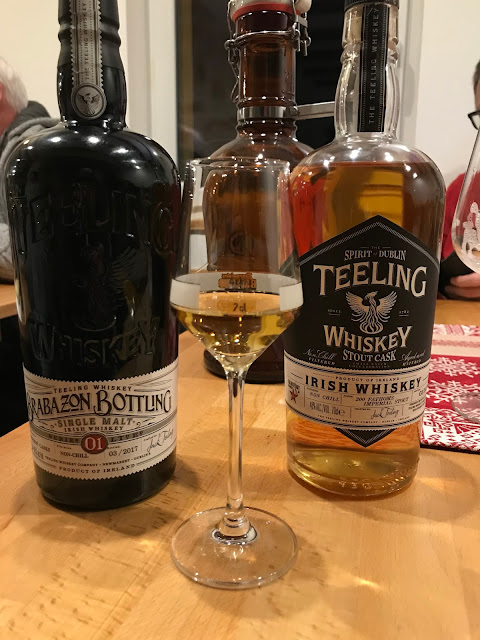 As this was held on St. Patrick's Day, I brought a little taste of Ireland to close the evening ;)

Great post! Not being able to tell Tannenzäpfle from Bitburger is the kind of comedy gold that always makes these worthwhile.

It should be done more often!

Thanks for posting. These kind of events are always fun and educational, and the results highly interesting even to non participants. I'm surprised about the Rothaus results...they don't cut any corners on production (they're state supported - Badische Staatsbrauerei), so really surprising they didn't fare better. Did you correlate best-before-dates? I mean, maybe the Rothaus was close to expiring and the winner was fresh?

As mentioned on Twitter, these were delivered straight from the breweries a couple weeks ago. They all were, apart from the Bit, which was bought locally. I will double check the dates, however.

I used to love Tannenzäpfle, always had a crate in the cellar, but the past few times I've had it, I've been left wanting :( State support doesn't always mean it tastes better. But at leastr personally, my love for it waxes and wanes. Currently on the wane.